Hope at last for sea-battered communities

The area spanning from Clifton to Tāngōio is the most developed and populated part of the Hawke’s Bay coastline, home to the city of Napier and several outlying coastal communities, including Haumoana.

Subject to existing coastal hazards that are anticipated to become more severe with future climate change, the area embraces thousands of homes and businesses, industry and vital infrastructure such as Port of Napier, Hawke’s Bay Regional Airport and Hastings Wastewater Treatment Plant.

Peter Beaven, 67, clearly remembers the Hawke’s Bay coastline of his childhood. In summer, the population of a few dozen residents was swelled by holidaymakers who pitched their tents at the Clifton campground, a broad grassy strip on the seaward side of the road. Over the years, Beaven, the chairman of Hawke’s Bay’s Joint Hazards Committee, has watched the sea claim the campground, then the road.

“The road used to be 40-50 metres seaward; it has been moved twice inland,” he says.

With the erosion of its coastline has come the erosion of property values and property itself, along with the gnawing away of residents’ quality of life and peace of mind. The 1970s saw the identification of the Haumoana 21, the properties most at risk from the advancing sea. Owners were offered land elsewhere, but only two took up the offer. The rest decided to stand their ground. Today, the Haumoana 21 are the Haumoana 15, with four more properties falling victim to erosion and storms. There is a growing recognition that with climate change, sea level rise and continued coastal erosion, other areas of the Hawke’s Bay coastline will be at risk in the near future. The present day value of potential economic losses due to coastal erosion and inundation over the next 100 years exceeds $1 Billion.

Hawke’s Bay Regional Council, Hastings District Council and Napier City Council have led a process to develop a long term strategy to manage coastal hazards. The Clifton to Tāngōio Coastal Strategy is being developed to understand coastal hazards risks and the management options for this key part of the Hawke’s Bay coastline over the next 100 years.

The strategy is a first for New Zealand in terms of the scale and complexity of assessment of such a large area. It is also a good example of a collaborative project between councils, consultants and academia, with a heavy emphasis on community engagement and working within the latest government guidance.

The collaborative project involved mana whenua/tangata whenua members appointed from Maungaharuru-Tangitū Trust, Manu Ahuriri Incorporated and He Toa Takitini. Technical and facilitation consultant support was provided by Tonkin + Taylor and Mitchel Daysh, with contributions from other consultants in the specialist assessment of economic, cultural and social impacts.

Community engagement was critical and a central part of the strategy development. Two assessment panels were set up to cover the southern and northern cells, with representatives including local residents, councillors and community groups. Through a series of 12 workshops, the assessment panels worked alongside Technical Advisory Group (TAG) to develop and assess coastal defence and risk mitigation options, while also reporting back to the wider community at public open days.

“The benefits of planning and using the community based approach as undertaken in Hawke’s Bay over the past 2 years has enabled a representative cross section of the regional community to be fully informed about the risks, threats and exposure of climate change to Hawkes Bay, have access to national and international expertise to inform themselves on options and approaches to addressing climate change impacts and has empowered them to make local decisions to local problems by using short, medium and long term time horizons,” says Graeme Hansen, HBRC’s Water Initiatives Group Manager.

A team of researchers and technical experts from New Zealand universities and Crown Research institutes, with experience in climate change and adaption, form the award-winning “Living at the Edge” project as a component of the Resilience to Nature’s Challenges National Science Challenge. The team selected Hawke’s Bay as case study opportunity. Its input, critique and advice helped the Technical Advisory Group to develop the strategy framework throughout 2017.

The team contained some of the authors of the Ministry for the Environment’s “Coastal Hazards and Climate Change: Guidance for Local Government” (2017), including Dr Judy Lawrence, Dr Rob Bell and Dr Paula Blackett. Although a lot of the strategy work predated the release of the document, every effort was made to ensure consistency with the ten-step process that forms the backbone of the guidance.

Tonkin + Taylor (T+T) initially assisted the three Councils and their communities by providing state-of-the-art probabilistic coastal hazard risk assessment techniques to identify the extent of hazard and the risks to social, cultural, environmental and economic values and then had a key role through the strategy development and assessment.

“We have worked with Council’s team and stakeholders, using the Ministry for Environment’s new pathways approach to develop a range of options to strategically manage the possible outcomes over the next 100 years,” says T+T’s Sector Director of Natural Hazards Resilience, Richard Reinen-Hamill.

“This experience puts us at the forefront of coastal hazard vulnerability and risk assessments and helping communities both to understand the issues and assist them in selecting appropriate adaptation strategies to the changing coastal risk arising from climate change impact.” 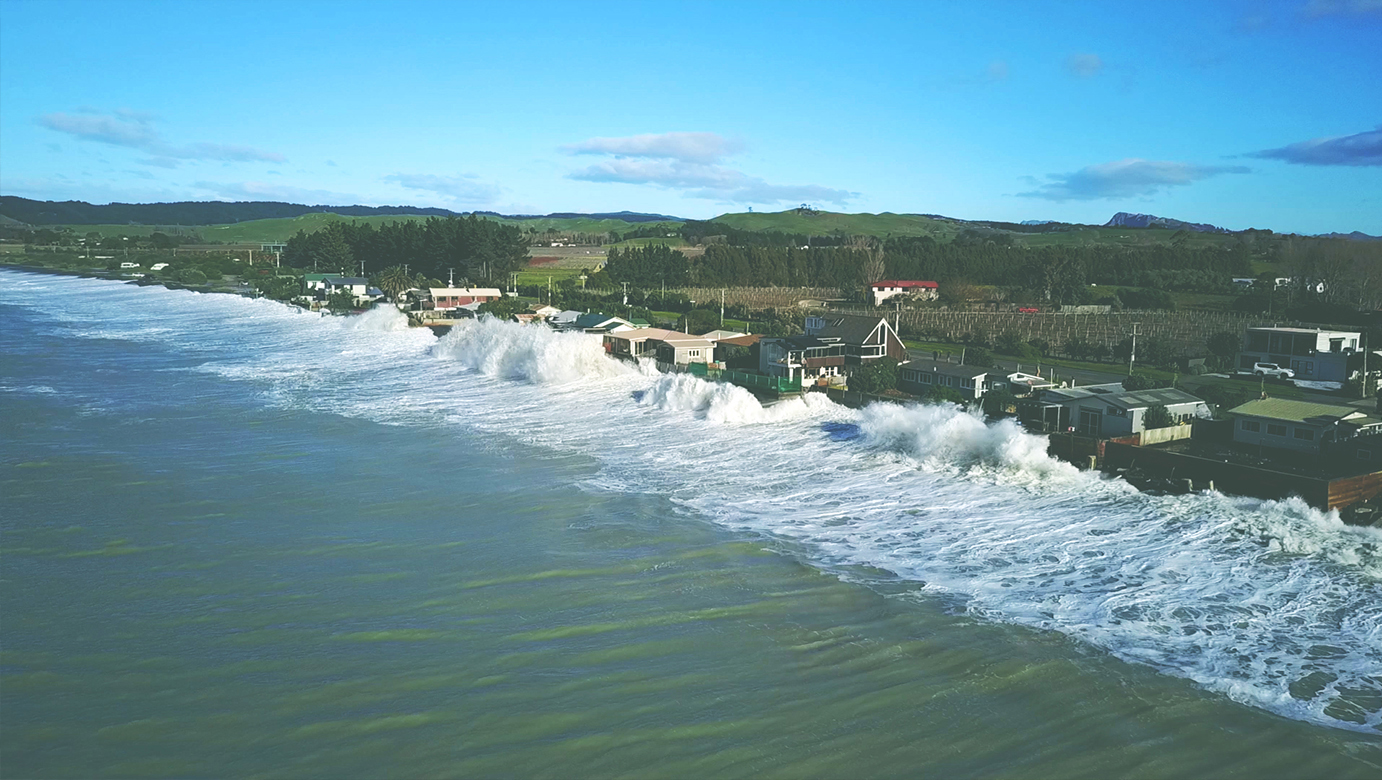 The following summarises how the five process stages described in the Ministry of the Environment guidance were applied:

STAGE 2: What matters most?

To put the coastal hazards in context, Tonkin + Taylor was tasked with producing a coastal hazard risk assessment, over three time steps, to identify priority areas and the timing of any required coastal works or mitigation. The overall risk assessment examines “hazard x vulnerability” where vulnerability represents damage and losses. The risk assessment presented information in terms of losses and likelihood for each hazard. Risk was categorized in human, economic, social/cultural and environmental terms for each hazard.

In response to T+T’s coastal hazard and risk assessments, the two panels identified nine cells for priority action, Peter Beaven says. “There are five cells south of the Port and four to the north,” he explains. “The next step was to consider possible adaptive policy pathways for the short, medium and long term.”

Tonkin + Taylor formed part of the Technical Advisory Group (TAG) that worked, in conjunction with the community panels, to develop options for coastal defence and hazard mitigation. Initially all options were on the table, but these were narrowed down based on the practicality of implementation and effectiveness of each response. This included an ‘ask an expert’ panel discussion, where community members could pose questions directly to TAG members, gain clarification on technical points and query the rationale for removing options.

It was recognised that employing a single hazard mitigation option over a 100-year timeframe, acknowledging the inherent uncertainty in factors such as sea level rise, is rarely the most efficient approach. This can lead to the over-design of defence options based on scenarios that may never eventuate, or may occur more slowly, and a loss of amenity and environmental benefits. Consequently an adaptive pathway approach was used to develop a series of responses over time that aimed to maximise the benefits, whilst minimising negative impacts and maintaining the ability to adapt through different strategies in response to observed impacts of triggers such as climate change.

Given both the large number of coastal defence and hazard mitigation options and the potential to switch between options through time, each unit had a large number of potential pathways over a 100-year timeframe. Tonkin + Taylor worked with members of the “Living at the Edge” team to refine the number of pathways to a maximum of six per unit, based on the practicality and feasibility of implementation. Each set of pathways was assessed using a Multi Criteria Decision Analysis (MCDA) framework developed by Mitchell Daysh. This was scored by the community panels, with guidance and specialist input where required, based on technical, social, cultural and environmental criteria. The output of the MCDA produced a preferred pathway based on the best available information at the time.

STAGE 4: How can we implement the strategy?

Initial analysis deliberately excluded an economic assessment so that it did not influence the selection of a preferred pathway. In order to gauge affordability and inform funding models, Tonkin + Taylor was required to produce high level concept designs and costings for the pathways for each units. These were used by a consultant, Infometrics, to carry out a real options analysis (ROA) economic assessment. Based on this information community panels were given the option of changing their recommended pathway. Councils were then able to assess the affordability of the recommended pathway and work with a financial consultant and TAG to develop a conceptual funding model based on targeted rates and charges to the wider district.

Development of a programme of works, detailed design, consenting and further public consultation is expected to occur in 2018.

STAGE 5: How is it working?

The decisions and recommendations made by the assessment panels are based on the best information available at the present time. It is acknowledged and accepted by all parties that decision-making in the context of climate change presents significant uncertainty, and that this uncertainty increases with time.

Accordingly, the Strategy will be reviewed every 10 years to:

Taking the above into account, the review will consider whether the actions identified by the strategy remain appropriate or should be amended in light of the new information.

The strategy has been well received by Councils and communities alike. “T+T’s expertise of predicted climate change impacts over the next 100 years and their ability to show this graphically to the strategy panels in an easily understood manner has greatly assisted the strategy process. This, along with HBRC local expertise, also assisted greatly in the optioneering process of determining response actions within the various cells with extensive expertise in concept designs and costing processes,” says Graeme Hansen.

Considerable investment will be needed to mitigate the effects of sea level rise and climate change, but will undoubtedly be “amply repaid” says Peter Beaven, and will likely require Councils to establish a multi-generational contributory fund. Nonetheless, he is happy with progress to date.

“I’m happy for several reasons. I’m satisfied that it is a robust, ‘bottom up’ process, which is both preferable and affordable. The community wants to have a hand in their fate, their future.”

Keith Newman, a resident of Haumoana and spokesperson for the lobby group Walking on Water (WOW), lives for the day when he and his neighbours will no longer fear “big tides and the wind blowing in the wrong direction.”

He knows that, unless mitigation measures get underway soon, banks and insurers will turn their collective backs on the owners of properties under threat.

“It’s the uncertainty…the big concern is not being sure what sort of future you’ll have,” Newman says.

Further information and latest updates can be found here.