The 26th Conference of Parties meeting in Glasgow (COP 26) is a chance for the world’s nations to come together to put in place changes that will reduce the impacts of climate change resulting from the release of carbon emissions since industrialisation. Any changes promised in Glasgow will take several years to decades to come into effect, and the lifetime of greenhouse gases in the atmosphere means that even when the fire is put out, it will take some time for the smoke to clear.

While most focus is placed on a figure of average temperature change for the planet, this needs to be considered in the context of what it means for other weather events. Increased temperatures result in increased heating of the oceans, which leads to greater and more intense rainfall and therefore the potential of greater flooding. We are seeing intense tropical storm activity and in locations further south and north than previously due to changes in the locations of pressure systems, which change the airflow and the frequency of wind events.

In addition to committing to reducing our personal and corporate emissions, which is vital to staving off the worst of climate change, it is important for businesses to consider how and when the climate may change in particular. This enables mitigation and adaptation strategies to be developed, then implemented at the right time, ensuring expenditure occurs when needed. It is important to understand both the potential risks from the climate pathway set as a result of the commitments made at COP26 and, as we move forward, the reality of whether those commitments are met, and the true climate pathway on which the world progresses.

An average change in climate, by definition, means that some areas of the globe will see much greater changes than the average, whilst others will hardly change or even see negative changes in climate indicators. This is why global climate models (GCMs) are important in understanding potential regional differences. There are many different climate models which consider different climate pathways. To save computational power, these climate models are often at low resolutions meaning that the data output can be for a grid of 100 km to 200 km.

Climate is influenced by ocean systems, land-ocean interfaces, mountain chains/significant terrain features and land-use changes. Resolutions of 100 km to 200 km have the potential to miss significant detail on four out of these five important interfaces, meaning that whilst global climate models can provide an indication of local change, they cannot provide local detail. For example, in summer, the Sydney basin can see temperature differences of up to 20 degrees between the coastal fringe and the western areas of the city. GCMs will see this as one location with one land-use type.

The width of New Zealand often means that it is covered by up to grid 16 points west to east and 18 grid points north to south, potentially missing out - or not sufficiently resolving - the large orographic features which dominate the climate (see Figure 1 for a comparison of resolution at 100 km versus 3km for New Zealand, note the difference in height of locations as well as the maximum height of terrain). Terrain height is only one contributing factor to the climate of a location, the same issue of resolution is present for land use, albedo, green fraction et cetera which all contribute to the climate prediction at a particular location. 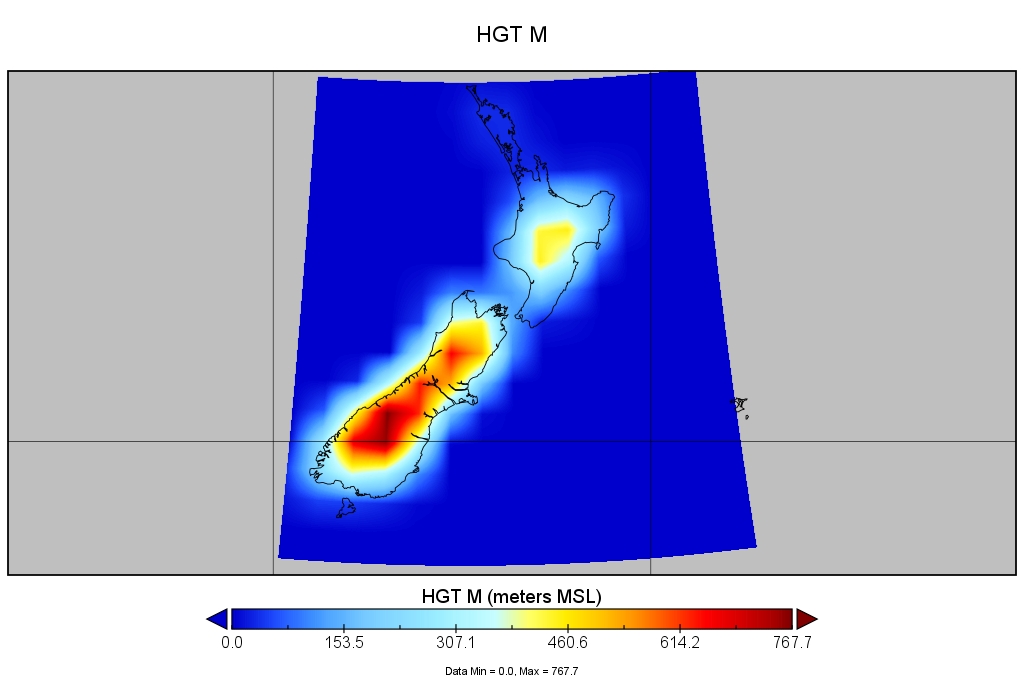 Whether a GCM is appropriate for your location can be thought of in terms of, “is the climate the same at your site as a location that is 100 km to 200 km away?”. If the answer is yes, then the output from GCMs is sufficient on which to base decisions. If the answer is no, then it’s time to consider the need for downscaling of GCMs before formalising mitigation and adaptation plans.

Downscaling takes the output from the GCM and provides localised information to provide a finer resolution of information that is more bespoke for the location. Downscaling can be completed either statistically or dynamically. Statistical downscaling involves comparing the output of the GCMs to locally observed meteorological data for the current time and applying the statistical differences to the future output of the GCM. This of course relies on the assumption that the current statistical relationships will hold true in the future which may, or may not, be the case. Dynamical downscaling uses models that have information on higher resolution terrain, land use and understanding of atmospheric physics to resolve meteorology at a finer resolution from the initial data.

Tonkin + Taylor’s air quality specialists have more than 150 years’ collective experience in the practice of meteorological modelling and understanding the influence of topographic and land use on those models. We are experienced in the use of the Weather Research and Forecasting (WRF) model. This next-generation mesoscale numerical weather prediction system, designed for both atmospheric research and operational forecasting application, was developed in the USA by NOAA, NCAR, U.S. Air Force, the Naval Research Laboratory, University of Oklahoma, and the Federal Aviation Administration (FAA).  The model can be used to downscale meteorological forecasts, historical reanalysis datasets and GCMs.

Combined with our climate change and hydrological teams, our specialists can provide a detailed understanding of whether the output from GCM will be sufficient, or whether downscaling is important for your business to fully understand the risks that climate change presents to your operations. The application of downscaling is important, whether you wish to understand the number of additional days of extreme heat, the frequency of wind events of different strengths for the planning of a wind farm or the potential flood risk that is present at a site.

Contact Iain Cowan to discuss these issues and find out how Tonkin + Taylor can help your business prepare for a more resilient and sustainable future.